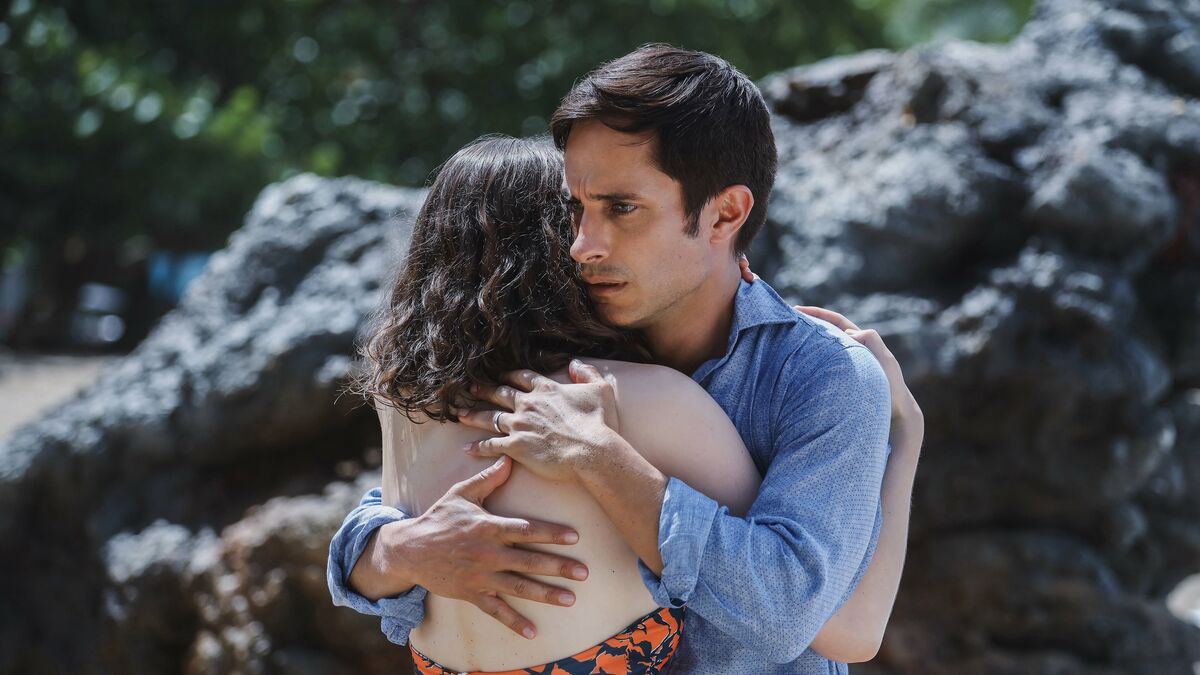 Quite often you’ll hear individuals say time flies, which comes as a moment of recognition rather than reality seeing as the passage of time remains the most consistent aspect of our lived experience. However, Old puts its characters in the position to truly have it fly by and the results have good intentions, but as with many of M. Night Shyamalan’s misfires, the error lands in the putrid execution.

At a resort to spend quality time together prior to announcing their divorce, Guy (Gael García Bernal), Prisca (Vicky Krieps), and their two kids get invited to a special secluded beach. There, along with other guests, they begin to realize they are aging in a rapid manner. As they try to leave the beach, they notice they may be stuck there with no hope other than aging up to an early death.

As with any M. Night Shyamalan feature, the narrative comes with plenty of intrigue on the conceptual level. A movie about individuals staying on a beach that rapidly ages them definitely raises the eyebrows and brings some promise to where the narrative will go. Putting together the story, in turn, leaves many questions and it’s up to Shyamalan to reveal the answers, or at least tie this into some sort of larger theme where the explanation does not matter as much. Old takes on this idea of aging well on a large conceptual level, especially when observing how this impacts the children right at the beginning, but when you get into the details of everything happening on the beach, it never quite reaches its potential.

The exact formula of how these characters age does not become apparent at first, but the first instance in which this gets noticed comes with Guy and Prisca’s children. Emun Elliott and Embeth Davidtz portray the children when they enter the beach at a young age and fairly quickly they turn into Alex Wolff and Thomasin McKenzie. This becomes the first true hint for how quickly this ages the characters and the scary facet of it all comes from these children essentially operating at a kid’s mental level and completely jumping ahead in a physical sense that must be frightening.

In this aspect, Old works at its best where it allows a reflection of how scary it can be to grow up as children with life going by so quickly. It gets even more difficult when seeing the scary reality of your own parents’ mortality running right before you and not having the stability to handle it all. This film certainly wants to work as a meditation on mortality and the fleeting nature of life where you can blink and miss some moments and when operating on this idea, Old can definitely be praised for being very insightful. However, everything actually happening on screen, in a way, betrays these aspects of the story for some shock value not so much contributing to the theme, but to create some lackluster frights.

One of the largest aspects of time occurring in this feature occurs when a specific character proves to be pregnant. This gets revealed in the trailer inexplicably, which I believe makes it fair game to speak on. When it gets revealed a character now carries a baby, the speed at which the child develops in the uterus and then is ready for birth shows the horror of how quickly this aging process moves, but everything ensuing in this scene and what follows leaves far too many questions about how this aging process actually works. When trying to get into the nitty-gritty of it all, the narrative just loses steam and delivers these shocking moments with no real substance attached to them. You have individuals aging physically but meant to pretty much stay the same mentally, but the inconsistency to which this all gets handled leaves plenty to be desired and really sinks the larger idea this film seeks to communicate.

While Old does not necessarily come with a traditional Shyamalan twist, it does have a major reveal providing some sort of context and while said context does get delivered, it also just takes away from the mystery of the beach. By overcomplicating what occurs on the beach, the film loses sight of its intended message and just falters its way to the finish line. This feature tries to do too much with its story, and as a result, fails as a whole. Perhaps choosing to tell this story as a horror flick may have been the wrong idea, as the attempted scares got in the way on far too many occasions. Far too many unforced errors on Shyamalan’s part but I certainly appreciate the ambitious swings he takes with his narratives especially with the reality of him mostly self-financing his own films. While Old does not necessarily land, I’m glad it exists.