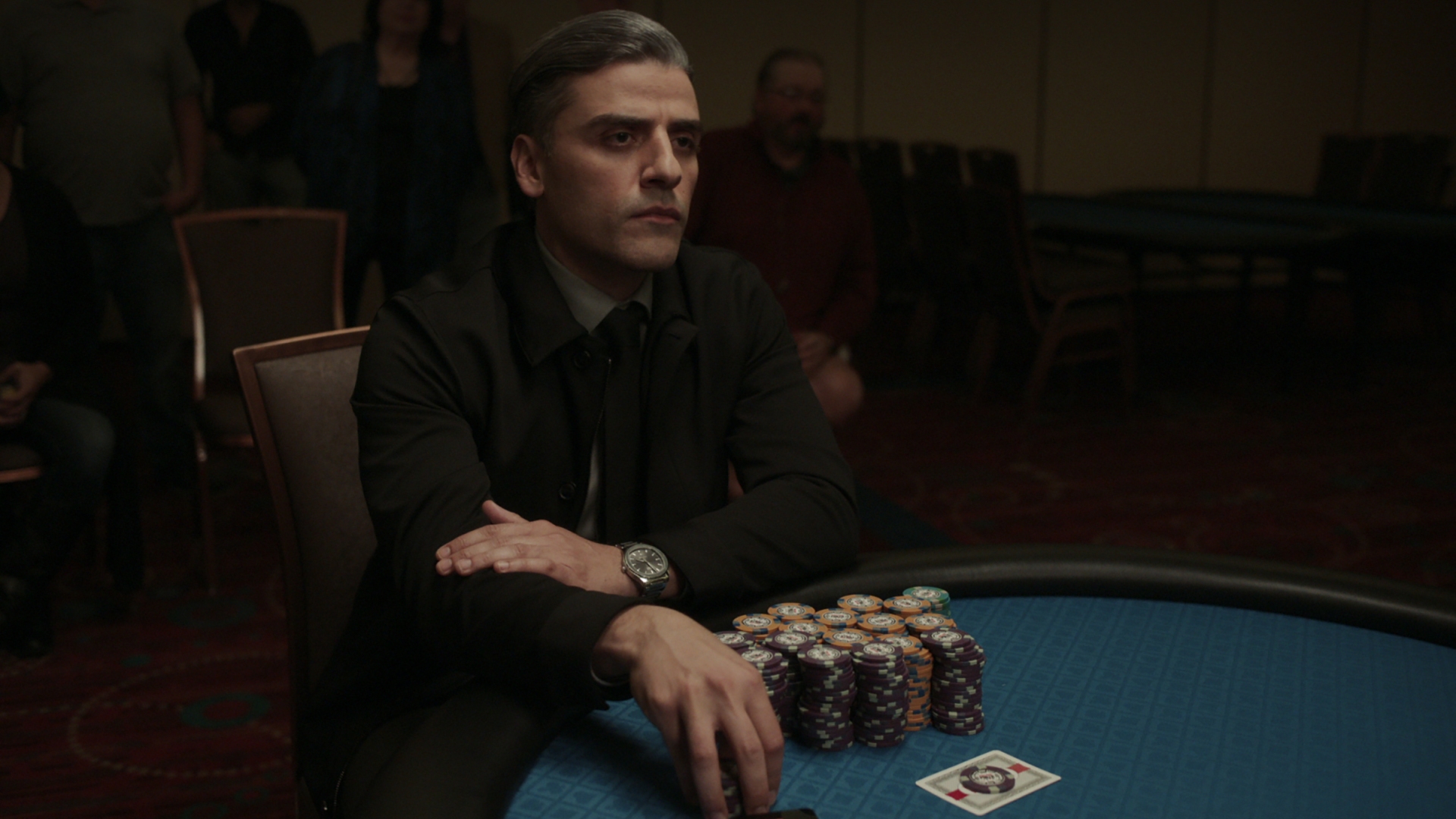 No matter the reparations done, some people cannot forgive themselves for the things they have done in the past. They cannot see a world where they can actually reintegrate themselves into society. This type of situation feels ripe for a Paul Chrader feature and we receive just that in The Card Counter where the sins of one’s past continue to follow each of the characters leading to their downfall.

Former soldier William Tell (Oscar Isaac) spends his days gambling moderately at casinos after spending a decent amount of years in prison. While he tries to keep a low profile, he gets recognized by a young man named Cirk (Tye Sheridan), whose life was ruined by the actions of Major John Gordo (Willem Dafoe), much like William. As Tell tries to set up Cirk with a new lease on life, he needs to confront his past head-on.

Simply reading the plot gives the large clue of this film being something originally written by Paul Schrader seeing as it has plenty of his trademarks as a filmmaker and on this occasion, he gets the opportunity to team up with Oscar Isaac. Coming fresh off something as incredible as First Reformed meant there was plenty of promise that he would go off on a good streak. While this feature comes nowhere close to the awe-inspiring heights of the aforementioned feature, this one still has plenty to chew on and contemplate.

One thing very much on Schrader’s mind at the core of this feature was the practices of torture utilized by the United States Army on suspected terrorists. Something that was proven to be unhelpful in actually preventing anything and mostly led to the deaths and serious injuries of those subjected to it. William faced charges for his actions in this practice and he has continued to reckon with it for years. Serving an eight-year sentence for it, he had plenty of time to think of the ways he could atone for these horrific actions. The only solace anyone can take comes from those who participated in it facing punishment and had their lives negatively altered, unless they got away with it. The search for one of those individuals that did propels the plot forward, especially when it comes to the relationship between William and Cirk. It sets up several moral quandaries and sets things off to bring William past his fairly passive lifestyle.

As the narrative’s actions transpire, the more we learn about William. The more that gets revealed the more one comprehends why he has subjected himself to the life he has chosen to live following his incarceration. From his strange peculiarities like only staying at motels when gambling and tying up all of the furniture in those rooms in white linen. This man can definitely be labeled as peculiar but Oscar Isaac completely owns what the role asks from him. He brings this quiet demeanor to the role where you cannot get a read on the guy and what his next action will be. This certainly helps him when he plays poker, and then when the other characters attempt to decipher the true meaning behind his glances.

Thus you have two narratives interwoven with each other. William’s journey with Cirk to set the young man for a brighter future when all he wants to do is kill Gordo and then the relationship he builds with La Linda (Tiffany Haddish) along with what it means to be backed by investors in the world of gambling. Two aspects of the feature but neither of them get enough room to fully develop into two distinct trajectories for William to go through. In moments each plot takes away from the other one, which does the overall feature no favors. It allowed for a lack of connection, which is the issue many will face with this feature. There’s this antiseptic nature to this movie that wears no emotion on its sleeve and just moves along. Very much something that could be expected from a Schrader film but does not necessarily work in this feature. Oscar Isaac certainly gives a good performance but not even he could pierce through a material that does minimal emotional work to its detriment.

Even with its faults, The Card Counter definitely proves to be a feature worth checking out. The layers it has could use more exploring but perhaps others will find more as they continue digging. It has this overly clean feel to it where it could have been better to have more dirt and grunge to it in order to receive the desired effect going on. Even with this in mind, it does have some intriguing dialogues it wishes to have through flashbacks and the resulting actions that can certainly be appreciated as it does not receive the quantity it deserves.