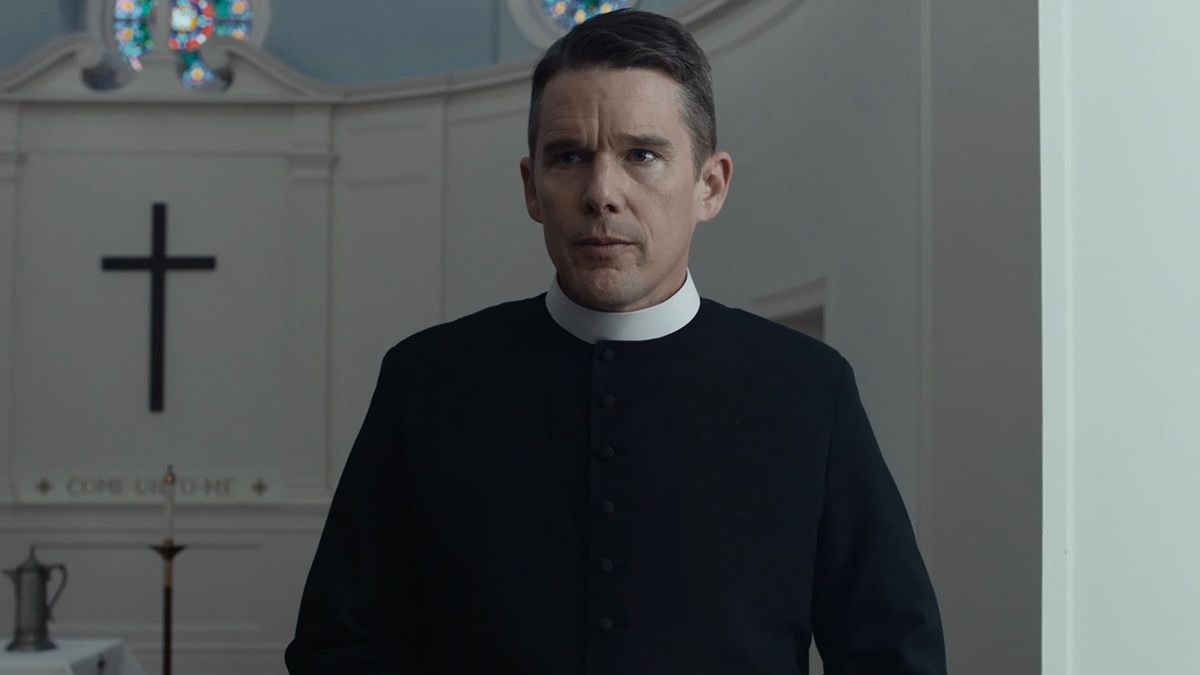 How we treat our bodies says plenty about how we value it. We can say all of the right things but the results speak to themselves, which can be equated to the way we treat the planet we call our home. It’s nice to state the value found on this planet until put to the task to try and save it from our own doing. An issue stemming right through the core of First Reformed in the way it blends this ecological issue with a crisis of faith.

Pastor Ernst Toller (Ethan Hawke) serves the community of Snowbridge, New York in the First Reformed Church. With his body going through medical issues, he begins to counsel a young man expressing issues with the state of the environment. While Toller sets out to calm the man of his concerns, their meeting ends up swaying Toller in his views.

Drawing many plot similarities to Ingmar Bergman’s Winter Light, this film takes the bones of the crisis of faith and expands it to reflect a more pressing issue compounding it. The way First Reformed starts out sets up the foundation of this pastor going through a phase of hardship. He decides to start writing in a journal and will burn it at the end of the year. He decides to write it down in a notebook rather than typing it on a word processor for a peculiar reason but one that will further underlie the inner conflict he battles. The idea of the journal makes for an interesting enough story but it only gets more precarious when it begins a form of radicalization of how Toller begins to equate his own body to the world.

The meeting Toller has with the troubled man, Michael Mensana (Philip Ettinger) at the behest of his wife Mary (Amanda Seyfried) does the opposite of the initial intention. The context Toller receives comes from the concern of Michael not wanting to bring a child into this world with Mary being pregnant. Concerning, yes, but the conversation held between the troubled man and the pastor completely reframes the story and for the better. It draws a parallel for Toller in how humanity has not been a good shepherd for this planet entrusted to us by God much like he has not been for his own body. The journey he goes on with this new struggle makes for a riveting and tense story of fully distinguishing his intentions.

With so much voice-over used with the diary entries framing many of the scenes, fully parsing through Toller’s thoughts become quite the challenge. Writer/director Paul Schrader works wonders with the script in order to create this state of confusion. Everything Toller writes and subsequently states to the audience displays a man starting to put the pieces together but not reaching the epiphany he needs to find to make everything click. It becomes such a drawn-out process for him because he must confront something staring right at him his entire life and must now confront the very possibility of him being complicit in it all, much like in his own destruction of his body.

God entrusted humans with their own bodies and protecting the Earth, which humans have unequivocally failed to do considering the amount of sugar and toxins we consume and the harmful amount we pollute. When young and naive, we may run around unaware of the damage until it reaches a point where it no longer can be ignored. That moment has arrived for Toller and now he sees the same thing happening to this planet with what Michael explains to him. We’ve all seen the documentaries and stories about ice caps melting and the impact it will have due to rising temperatures but despite all of the information what has been accomplished to change anything? Not much, which drives Michael to do the drastic actions he plans and subsequently get passed onto Toller in the process.

Schrader frames this inner turmoil so well as Toller continues to ignore what ruins his own physical health in favor of discovering the way his own church has contributed to the larger issue with the environment. First Reformed explicitly displays the blatant hypocrisy running through religious institutions and how they’ll selectively pick out bible verses encouraging their rancid behavior while also ignoring the hundreds condemning it. The small First Reformed Church celebrates 250 years while Abundant Life takes care of it financially and essentially looks more like a complex than a place of worship. It really puts to task these men of the cloth in their pursuits to be good shepherds but casually ignoring things that raise major questions in how they advocate for the very Earth they were entrusted to shepherd.

This certainly does not mark Schrader’s first time battling the religious struggles of an individual. He has two alone with Martin Scorsese that he wrote with Bringing Out the Dead and even The Last Temptation of Christ where the messiah fights with his own struggles in faith. He has an uncanny ability to get into the headspace of these characters in a challenging manner to try and decipher where their thoughts meet their actions. With Toller, Schrader has the ability to further complicate his situation and the hole he needs to dig out of in order to find whatever tranquility he seeks. The end goal remains unbeknownst until absolutely necessary which makes for gripping moments where I found myself holding my breath for what the next decision and action would be. Equally strong directing as there is writing here.

Ethan Hawke takes this role and absolutely owns it. Certainly one of the best actors who mostly goes unappreciated out there, he captures the physical weakness of this character and the emotional anguish he must power through. Next level acting by Hawke, who won over my heart forever in the Before trilogy and just continually puts in stellar work.  His turn as Toller displays he has not lost one ounce of the talent he has displayed throughout his career and proves he will continue to wow me with the level of range he can display within a single performance.

Religious crises, ecological warfare, and plenty of tension define the tenets of what makes First Reformed such an astounding piece of cinema. It finds some of the best talents in the industry operating at such a high level to tell a story continually unfolding into something more sinister and saddening as it goes. Feeling both classical and extremely current allows this story to give off vibes from Bergman’s film back in 1963 and an issue people should pay more attention to before it’s too late.

One Reply to “Review: First Reformed”