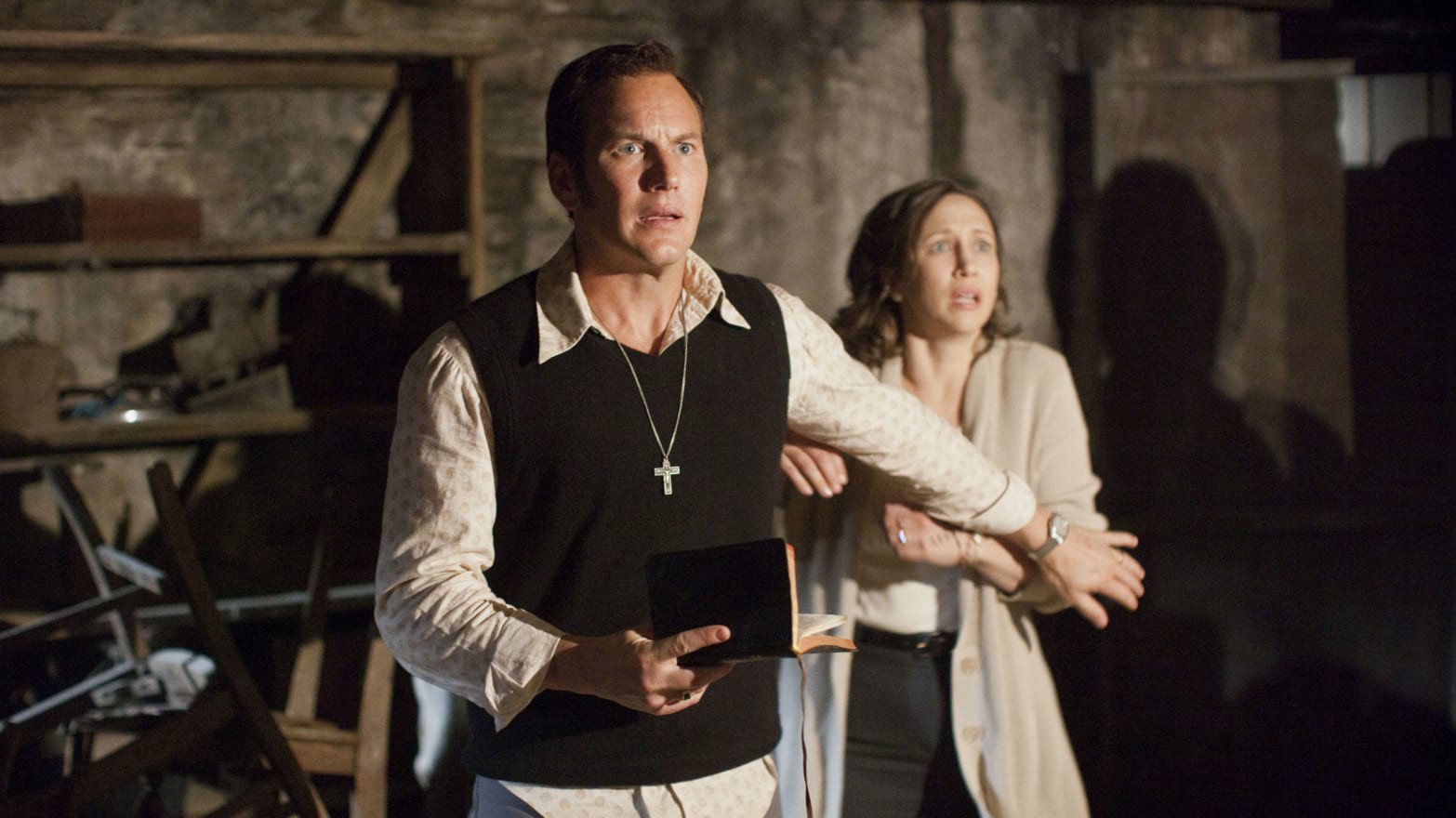 Doing proper research when purchasing a house carries such a level of importance, and even more so when moving into one where a witch cursed anyone who would inhabit it in the future. Unfortunately, for the family in The Conjuring, they did not do the proper research, but they get the help of a dynamic duo with the incredible ability to help them out.

After moving into a fairly secluded home in Rhode Island, the Perron family begin to experience the presence of supernatural beings in their home. The instances get so extreme, they enlist the help of well-known demonologists, Ed (Patrick Wilson) and Lorraine Warren (Vera Farmiga). With their arrival, they discover a truly terrifying situation at this haunted house.

Whenever I watch horror films, the thrill I receive typically comes from the circumstances involved and how it impacts the characters, but I never fear the content on display for a variety of reasons. One includes the ridiculous nature of some of them with characters like Michael Myers, Freddy, Jason, and a host of other fictional characters. The level of fear they can make me feel only goes so far because they do not truly exist, but this film falls into the category where the fear becomes real. As someone raised Catholic, I have grown up with the belief of spirits and demons being a distinct possibility because of the push and pull between God and the devil for our souls. Now add a case, which actually occurred in our reality, and this film shook me to my core. Sure, there are plenty of horror films dealing with spirits, but The Conjuring does an excellent job of balancing the horror and also the heartwarming nature of love and family.

At the center of this story is Ed and Lorraine, who actually existed and dealt with cases like the one portrayed in the film. While the validity of what occurred can be argued, the fact two people went around and walked into the lion’s den of demons to help others shows a level of bravery I cannot fathom. It makes the casting of Patrick Wilson and Vera Farmiga as the loving couple such a smash hit. Each of them has starred in other features, but these roles match their sensibilities in such a powerful way. Patrick Wilson brings a level of maturity to the character of Ed and Vera Farmiga creates such a compassionate figure in Lorraine. They become integral to the mood of the movie and explains why I adore the film so much.

The scary moments land like a hammer, which I will get into more later, but the level of security both Ed and Lorriane bring to the story helps establish the walls of protection from the spirits who love to be disruptive to the poor Perron family. Before the Warrens arrive at the scene, each night has horrifying imagery and events that will make you question why the Perrons decided to move into this gateway into hell. The scares become nonstop, but when the Warrens, arrive a level of calmness occurs not only in the house but also with the tone of the film. They provide levity and care with the way they interact with the terrorized family and pose a threat to the demons torturing them. It comes with the same feeling of when you have a plumbing issue that has been plaguing you for days and then the plumber arrives to fix the structural issue. It comes as a sigh of relief. They provide a barrier between the demons and the Perrons, but also us, as the audience, which makes when even they get scared by the madness all the more terrifying.

James Wan knows how to make excellent horror films and The Conjuring certainly stands out as his most robust work. Much of the credit goes to putting together a real story of a haunting, but also in the way he decided to shoot the horror sequences. While jump scares continue to plague the horror genre with the basic formula utilized, it works at its highest level in this film. The scares never happen in a cheap way, but instead, they all have a purpose and serve the story in a bone-chilling way. They all have a level of creativity to them where some use the typical look-away and scary image reveal when they turn around, but also through subtle movements in the background. The real gut-wrenching moments come in the use of slow movements made by the frightening images. Those moments play out in such a terrifying manner with one, in particular, demonstrating seeing an apparition from its back and then when it notices the presence of the character, but also us, as the audience. It gets used on multiple occasions, and it works in a fresh way every single time in this film. Watching this movie the first time had me petrified of these sequences, but on subsequent viewings, I’m left in awe of the effectiveness of these scenes. They are masterfully constructed and so undeniably scary.

The success of this film has led to an entire universe of films following the cases of the Warrens with good reason, as their stories carry a level of intrigue whether or not they actually occurred. A large part of it comes from documentation and this film shows the process the Warrens had to do in order to have a priest perform an exorcism of the house in question. The Conjuring even allows moments of red tape and bureaucracy to feel thrilling because of what’s at stake. Additionally, it shows how demons try to break someone down in order to possess them to a startling. Again, the validity of it all may be in question, but it makes complete sense if one believes in spirits and other things inhabiting our reality.

Undeniably effective with its scares, but still a completely loving film at its core, The Conjuring weaponizes its “true story” moniker and utilizes it to a terrifying degree. It demonstrates an excellent horror director casting two perfect actors to become the anchor of some unsettling imagery put forward in this story. It becomes a race to figure out what to do with the spirits inhabiting this house before something truly tragic occurs to the loving family we get introduced to at the very beginning. At the very least, this fantastic film teaches the importance of doing proper research because I would hate to go through the house-buying process only to figure out there’s a spirit trying to kill me within the space. The Conjuring has it all, including a premise that actually scares the daylights out of me, and comes together as one of my favorite horror films ever made.

8 Replies to “Review: The Conjuring”