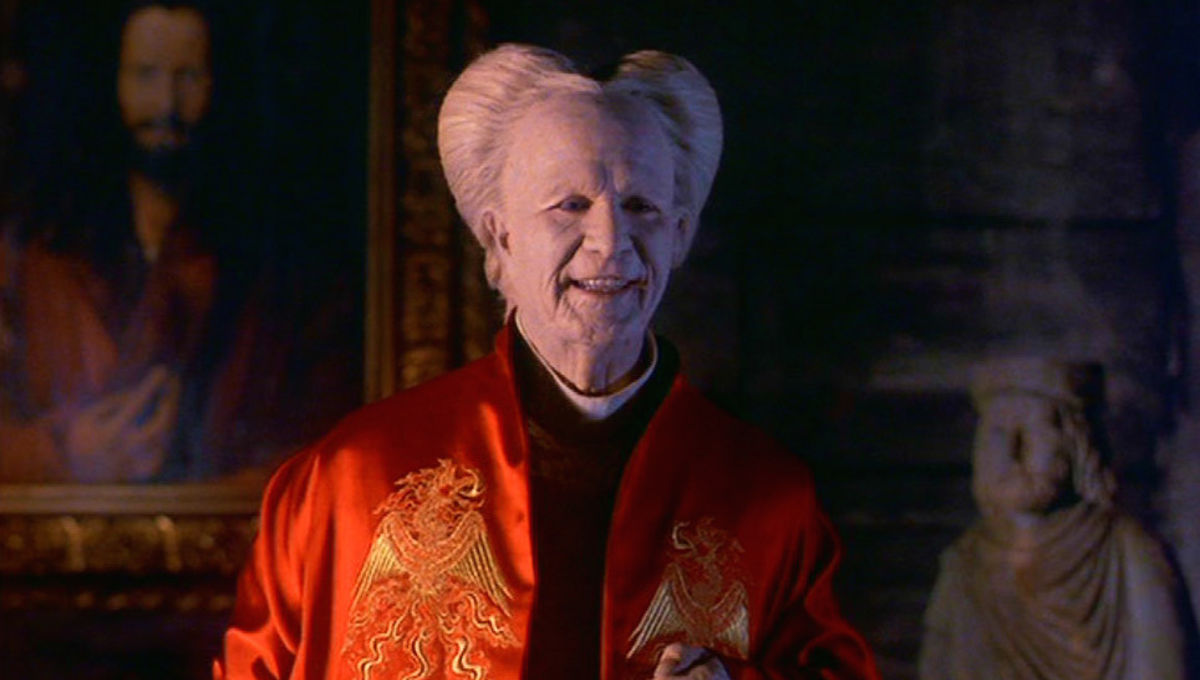 Well-known stories deserve interesting twists to justify yet another re-telling. Some way to jazz it up and make it worth the entire exercise either in its narrative structure or style, which this version of Bran Stoker’s Dracula definitely attempts to do. While the final result displays a chaotic mess, the journey and the horniness, in particular, make this a wild experiment something to watch in amazement.

With the wonderful opportunity for advancement by landing a big deal, Jonathan Harker (Keanu Reeves) heads to visit Count Dracula (Gary Oldman) in Transylvania. With this visit, he notices some strange occurrences and discovers the Count may be more than he initially let on.

This sensual move makes its own impact because this era in time heralded a puritanical vision of sex where it would occur only after marriage. It builds up all of this sexual energy ready to burst out of these characters and the circumstances provide the perfect situation. This explosion occurs most noticeably with Mina (Winona Ryder), who’s set to marry Jonathan. Their wedding should be happening already, but this trip to Transylvania provides the perfect opportunity for him to advance his career and then he inadvertently must spend a month there. It became pretty clear she wants him in more than the emotional way, if you catch my drift, simply by the way she kisses him goodbye. Seeing her explode in a sexual sense later on demonstrates exactly the level of horniness this film wants to exude.

It has such a pulpiness to it, which makes scenes intended to be scary end up being unintentionally funny. This mostly occurs when Jonathan spends time with Dracula in Transylvania. While the older looking Dracula presents himself amicably to the young man, the shadow work in the background tells a different story with one occasion showing it trying to choke Jonathan. Now, it does create the desired effect of showing internally what Dracula would hope to do to the young man but combining it with the hilarious make-up work on Gary Oldman left me struggling not to laugh at it. Dracula comes loaded with these moments, which may or may not have been intentional on the part of Francis Ford Coppola, but nonetheless, it certainly made an impact.

Where Dracula finds its struggle comes from the pacing and just how long it takes for the story to reach its ultimate conclusion. With this entire story being told in the 1931 iteration, it told more of the tale in much less time. This retelling adds more, provides less context in some aspects, and then feels drawn out as a result. On several occasions, I found myself just willing the narrative to keep moving forward with the story points already known if one has previous experience with the source material. A shame really, considering everything in the first and second act had enough of a blend of horniness and pulp to make this such a bewildering experience but the third act continually dragged down the overall quality of the feature, thus leaving me mixed as a whole.

Everyone loves Keanu Reeves for a plethora of reasons, but his shoddy acting never reached worse levels than his portrayal of Jonathan Harker. He struggles not only with the line delivery but also the British accent he needed to take on. It certainly became a struggle to sit through but in a way, it matched the overall pulpiness of the feature. It became comedic whenever Keanu worked alongside Anthony Hopkins as Professor Van Helsing where they both were on two very different wavelengths. Gary Oldman shined brightest because he has to portray the older disheveled and younger version of this character. He needs to capture this alluring presence within him to make Mina think of him as a sexual being, which may have been difficult when seeing what he looked like back in Transylvania. Never did I think Oldman could exude so much sexual energy but yet there he was.

As Francis Ford Coppolla’s features go, it just makes me laugh how it fits into this filmography. While I am limited in seeing most of his films outside of The Godfather films and Apocalypse Now, comparing this to his masterpieces, everything about Dracula feels odd and weirdly refreshing. While it does not have the overall quality, his directorial choices make for such an interesting observation on this classic story with how he captures these characters and helps exude the pure sexual energy emanating from everyone.

Shutting it off after the second act may be for the best due to its pacing, but Dracula proves to be a film with several moments of greatness. It allows for some to look past the horrid acting at times as an exercise in egregious pulpiness. Experiencing this film through this lens allows for many to enjoy it but as a complete feature film, it has far too many pitfalls for me to classify it as genuinely good.